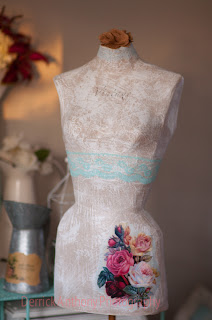 Earlier this year, I acquired a vintage mannequin or dress form and then a short time afterwards, was given 3 bodices from modern mannequins.  The vintage dress form is quite old had a wooden stand and the body was a  hollow paper mache form and covered in something that was meant to look military-ish, but was just rather ugly instead. The modern ones were just plain white like those in most retail stores these days.

Like I often do, I hung on to them for a while until I got 'the vision'.  Then I went to to work. The vintage dress form had been a bit weak and was in two pieces, bosom and abdomen   So  I gave her 3 new coats of paper mache to not only strengthen her rib cage but also to make it one piece again.  The paper mache was a lot of work, but I found it therapeutic some how.  She was then given a shabby chic makeover with bits of lace, a large floral decal and a burlap flower at the neck.   I also transferred the word vintage on her decolletage.  Now that she is rebuilt, she'll last for many more years and she is really beautiful, must more so in person.  A great way to display for vintage jewellery or lingerie.

The 3 modern mannequins were going to be a little bit more of a challenge.  But after giving it some thought, I figured that if I could paper mache the old one, I could paper mache the new ones as well.  Each one was given 2 to 3 coats and then embellished.  I named them and then transferred their names onto their decolletage as well.  They have such a beautiful vintage inspired style about them.  I love the way they turned out.

So.....Meet the girls.....they are from the closest, Rose, Spice and Girly Girl.  Rose (my personal favorite) was sold at the 2012 Vintage Chicks event to a lovely young lady that is opening her second jewellery boutique. 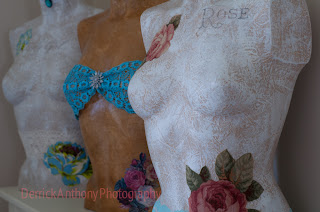 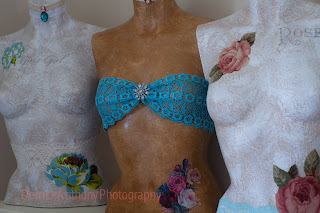 Any my vintage girl....isn't she lovely? 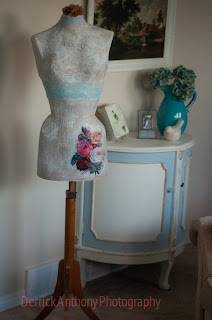 One thing I learned in this process is that fabric decoupages onto curved items  much much better than paper.  It also stands up better in a damp or humid environment.

Thanks for stopping by.